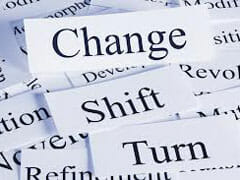 The desire for change is a paradox. We know that it is important to accept ourselves and not be so self-critical, and yet at the same time we may have less-than-desirable habits we’d like to replace, traits we want to enhance, or skills we’d like to develop.

Change happens unceasingly around us and we are called upon constantly to adapt and grow, or wither. Carl Rogers believed that all living organisms have a tendency toward growth, and that as people we strive to actualize our inherent potential.

Then what makes change so challenging? A situation that frequently comes up is someone who feels he truly wants to change but is baffled by his inability to do all the action steps that he has agreed to do. He started with the best of intentions – what’s going on?

Think for a moment about the experience we all share. We have all made the major change of stopping the addictive behavior of drinking.

The change didn’t happen all at once. It probably took quite a while to work through the denial, the attempts to control, the realization that something had to be done but not knowing exactly what, the knowledge that we weren’t sure we really wanted to stop, the decision to stop, the actual stopping, and the integration of new habits and behaviors.

Other changes, too, unfold through a series of steps. Psychologist James Prochaska and his colleagues studied people who made successful changes and identified these stages:

Precontemplation
The person denies having a problem and has no intention of changing their behavior. They might be demoralized and resist talking about their problem because there doesn’t seem to be a solution.

Contemplation
“I want to stop feeling so stuck.” The person acknowledges their problem and struggles to understand the causes and wonder about solutions. They may be far from making a commitment to action, however.

Preparation
The person is planning to take action within the next month. They are making final adjustments, and have made their intention to change public. They may have instituted a small number of changes already, but they have not necessarily resolved their ambivalence.

Action
This is the most obviously busy period. The changes are more visible to others and receive the most recognition.

Maintenance
Change never ends with action. This is the period where the changes are incorporated and the time to be alert to the risk of relapse.

Termination
The former problem no longer presents a temptation or threat, and the cycle of change is exited. (We know in the case of some changes, like addiction, that there is no “cure”, however.)

You can be at different stages with different issues in your life. Also, the stages are not linear; you can – and probably will – spiral back to previous stages, such as contemplation and preparation, before you are actually able to proceed with effective change.

This is what is so important to realize: spiraling back to previous stages and being ambivalent are all part of change. This does not constitute failure. So what do you need to do?

It’s important to recognize the stages of change so that you don’t judge yourself a failure. This is not the time for self-criticism.

Behaviors “travel in packs” and nourish each other. You might be altering other behaviors or attitudes that will have an influence on the main thing you want to change.

It’s good for you to sit with those feelings of ambivalence instead of running away from them because they’re uncomfortable. Being present with the ambivalent feelings is a step toward change, while putting off change isn’t.

Even people who are not ready to act can set the change process in motion.

Think about something you have been meaning to change, or are actually trying to change right now. What stage are you in?

A “frozen in place” feeling – the result of ambivalence – can be a familiar place for people with addictions. Alcoholism has been described as “ritualized stuckness,” where chronic contemplation goes amok. You can substitute thinking for acting, and tell yourself that you will act someday. Just because we’re free of addiction doesn’t mean that we’re able to take the action steps we need to take.

Here are some of the traps:

You explore every aspect of an issue to determine its origin. You hope that the problem will go away if you find enough pieces to the puzzle. But you get bogged down. The reality is that you may never know the cause of certain problems, and generally a problem has many factors contributing to it. If it’s a case of starting something new, you get caught in needing to learn more – you’re not quite good enough, not quite knowledgeable enough, to start.

You talk about your problem until all your friends get sick hearing about it. You find excuses to delay action. You believe, somehow, that there will be a magic moment that is perfect for change, a right time. Serious consequences to not changing still seem too distant or too long-term to matter.

This is a big one. You want to have your cake and eat it too. You want to go on living as you have, but with different consequences. It’s easier to wish for change than to work toward it. “I wish I could eat what I want and not gain weight.”

Someone is nagging you to change, so to get them off your back you agree to do so. Then you fail. You made a half-hearted attempt to change, and then fail, by either conscious, or unconscious, design. This way you can make the other person wrong and you are off the hook.

When you hold back, you deprive the world of your talents. When you are unable to move to the next step, you deprive yourself of a more enjoyable life. If you’ve been sitting on something for six months or longer, try something different:

Self-revaluation
Look at your essential values and see if they’re in conflict with your problem behaviors. You can focus on the negative side, i.e. how disgusted you are with your weight problem. But a more compelling pull is a positive, forward-looking assessment. How can you structure your life to be more aligned with your values? For example, do you value a healthy body, and want to nourish it with good food and enjoyable exercise?

Look at a scenario in which you don’t change
Pick a time five years from now. See your health, or other aspects of your life, deteriorate further. See the dream that you have never come to fruition. Are you willing to accept this? Or will you regret it in five years when you look back and realize you missed an opportunity to start?

Find a mentor
You probably didn’t get sober all by yourself. In recovery you learn that you need other people. Mentoring is designed to help you achieve your heart’s desires by giving you structured assistance and unwavering support. You can move in big or little steps – it’s up to you – but you’ll know you are moving in the direction you want to go.

Reprinted by kind permission of the author. Her website can be found at www.intentionalpath.com.