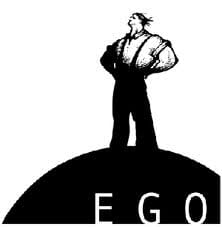 In my first year of sobriety I made the rather startling discovery that my problem was not really alcohol, it was me!

Specifically, my problem was centered in the way I had perceived the world and myself, the way I thought, and my inability to control my erratic emotions. Getting out of the problem, therefore, must mean in some way getting out of myself – not something that I was comfortable with or in the habit of doing.

As a sensitive, fearful child, I quickly learned to be ashamed of my feelings. As a result I learned to hide, and to present a facade to the world. No one must know what was really going on in my head, and I became used to interacting with others on a basis of dishonesty, and self-centeredness.

At the root of this behaviour was an underlying feeling of inferiority and worthlessness that influenced every emotion, decision and action.  To bolster my fragile ego I told myself that I was better than others, and sought opportunities to prove it, all the while sinking deeper into mistrust, loneliness and isolation. I was, as they say, “an alcoholic waiting to happen.”

It was very difficult for me at the end of my drinking career then, to get out of my problem – meaning me. I had been relying on my own instincts and judgement for so long, trusting in nothing and no one, that to take direction from another source seemed unnatural, impossible even.  Even to admit I was powerless had immense ramifications – my fragile ego relied upon my own sense of power and control to sustain itself. Without this illusion of control, the world was a frightening and unknown void I didn’t want to face. It was necessary to hit a bottom hard enough to experience near-complete bankruptcy as a human being before I would be willing to give up my stubborn independence. Most of my beliefs and attitudes would have to change if I was to recover.

Late one night in my second treatment center, the last bit of self-sufficiency finally gave out. I was finally at ‘the jumping off point.” What would the harm be in actually trying the suggestions in the Big Book? I hadn’t much going for me anyway, and it certainly wouldn’t hurt me to quietly try some of Bill and Bob’s ideas.  I had difficulty trusting another person at this point, but I did trust them. Thus began my true recovery, after two years of counsellors, therapy, treatment and being an AA ‘spectator.’

In the morning I sat on the edge of the bed, and said a simple prayer to have my obsession to drink removed. I didn’t know who or what I was praying too, but it didn’t really matter, just taking the action was the important thing. I expanded this routine as the days went on, and immersed myself in the AA literature and program. Slowly I began to feel better, and a ray of hope appeared in my life.

A few years later, I am still trying to live in the solution, which I find through the three-part structure of Alcoholics Anonymous: Recovery, Unity and Service. I need to work all three areas to stay sober and sane.  Every day I have a choice to live in recovery or in my disease. My problems still relate to self-centered fear, anger, negative thinking and the like. The difference today is that I have a better idea of what is wrong with me, and where the solution lies. My problems have become more right-sized, along with my ego.  I try to play well the cards that I have been dealt, use the tools I have acquired through AA, and make amends when I stumble and fall.

I’ve learned that the twelve steps really boil down to Love and Service, as Dr. Bob said. When I use these principles of the steps to guide my actions, good things usually happen. I have repaired damage, rebuilt relationships, and hopefully helped a few alcoholics along the way.

Perhaps the greatest lesson I have learned is to let go, to get out of the way, and let things happen the way they are supposed to. Surprisingly, the world seems to get by without my having to control it. Though I’m far from cured, I lead a vastly more productive and satisfying life, and am able to provide my family with more of the love and stability they deserve.