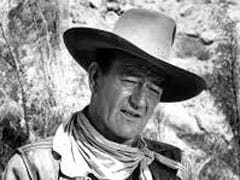 There are certain words that are used in the treatment of addiction that are not commonly used in connection with other diseases or illnesses; surrender is one of them.

When I think about the word surrender, John Wayne comes to mind. The vision I have is that of a battle scene and Colonel John Wayne is saying either “We will never surrender” or “If we don’t surrender, then not only will we die, but all the people in the fort will also perish.” When I imagine him saying the latter, he is holding a white handkerchief.

The interesting aspect of this vision is that it is a battle scene, therefore death is imminent. More than one life is at stake. The concept of surrender in either vision is never about cowardice.

It is undeniably true that people who surrender in any situation imaginable want to live. Nobody surrenders to die. Surrender is about life.

And this is an important point to consider. Too often people emphasize the negative interpretation of surrender, meaning either cowardice or simply giving up. In the context of recovery, the word surrender is a powerful and hopeful word.

Rather than cowardice, the recovering person has embraced the concept of courage. He or she is willing to face reality, knowing that the drinking cannot continue and an alternative remedy needs to be sought. It is not about “simply giving up”; rather it is about confronting the issue of alcohol seriously and affirming a different way to live.

Alcoholics who are drinking are not really living; they are merely existing. A negative attitude has developed that blocks out authentic living and is replaced by destructive behaviors. A dullness pervades their actions and speech. Creativity is exchanged for a “do nothing” approach to life.

A.A. rightly calls this state of mind a powerlessness that eventually fosters unmanageability.

If you were writing a script where the concept of surrender would emerge, it would probably involve a person or people realizing that if they continue to fight they would either die honorably, i.e. “We will never surrender”, or, “There is no possible way that we could win this battle”.

When we consider the word surrender as it applies to addiction, particularly alcoholism, we see both concepts at work. Although I don’t like to be pessimistic, it seems the considered view of many surveys that most alcoholics do not surrender. They die in their disease. Families and close friends suffer and are affected by this suicidal stubbornness. “I’ll never quit,” says the active alcoholic.

Why do most alcoholics not get well? Well, the word addiction says it all; some people are so attached to the behavior that they believe that they cannot stop. For others, the love affair with alcohol is more important than life itself. Others, regardless of the apparent unmanageability, are in denial.

Whatever the reason given – and they are legion – most alcoholics do not surrender; they do not embrace recovery.

And what of those who do surrender and begin the journey to wellness? Invariably they have been hit by a severe dose of reality. An intervention, either natural or organized, has confronted the denial, and they surrender.

This was my story. After multiple incidents that revealed my powerlessness over alcohol, including a car crash, my situation became crystal clear. If I continued to drink, I would lose everything. And I was not the only person affected. My behavior produced suffering in family and friends. Reality preceded the surrender. And so I became the Colonel John Wayne who hoisted the white flag or handkerchief.

I surrendered to live. I had enough sanity to know that the writing was on the wall. It made sense to realize that if I didn’t get in the boxing ring with King Alcohol I would not get beaten up. A.A.’s slogan, “don’t pick up the first drink”, made sense.

Over the years, I have defined spirituality by being a positive and creative human being. The concept of surrender becomes extremely spiritual when we realize that it is the beginning of the journey towards wellness; surrender really is the First Step.

“We admitted we were powerless over alcohol – that our lives had become unmanageable.”

That sentence says it all.

The “spiritual awakening” that is later promised in the recovery program is dependent upon the alcoholic’s willingness to admit that there is a problem. In this sense, surrender and admittance become intertwined.

Once the surrender step has been taken then everything starts to look better, healthier. We begin to look better and have more energy to face each day and create a better life.

We begin to see that real life involves more than our needs; we open recovery to the concept of a care for others and the exploration of what a Higher Power might look like.

We clear away our painful baggage with serious amends that enable the possibility of healthy relationships.

And so, with this concept of surrender we begin to fall in love with life. And hopefully with ourselves.

Reprinted by kind permission of Steps for Recovery. Reverend Leo Booth is a Unity minister, a published author, and conference and workshop presenter in all aspects of addiction. He is also the author of “Say Yes To Life” and the workbook “Say Yes To Life: Continuing The Journey”. For more info please visit his website www.fatherleo.com or email him at fatherleo@fatherleo.com.